About time I wrote something new...

It's been almost 3 years since my last post so I thought I'd better give an update.

Since early summer I've been active on QO-100, I'm one of only 6 EI operators that are, as far as I know, licenced to use that portion of the band. So far I've racked up 55 DXCC but given the scarcity of EI calls on the satellite I thought I might have been in greater demand. There are plenty of German stations actiev on the satellite and given their level of involvement in the QO-100 project that's hardly surprising.

Oddly enough I still haven't work any stations north of the border, it seems there is no one on QO-100 from Northern Ireland. Come to think of it, the Isle of Man is quiet too...

Maybe when all this Covid nonsense has eased I may try and activate an island using an 'EJ' callsign, I reckon that may cause a pile up..!

My QO-100 setup is an Icom IC-7000 using an SG Labs transverter on 70cm into an SG Labs amplifier into a PoTY feed on a 1.4m offset dish. I normally use a websdr for receive although I do have a modified LNB which I can use with SDR Console.

Since FT8 was unleashed on the amateur radio community last summer I've made many contacts using this mode. However, in recent weeks I've noticed an increase in the number of failed QSO's, i.e. where a QSO fails to complete with the '73' exchange and can be logged as a valid QSO. In many cases contact is established with reports exchanged but then an almost endless cycle of RRR's are sent without reply causing me to cancel the QSO and start again. 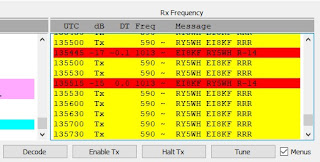 Like a lot of amateurs out there I've recently discovered the joys of a recent innovation in the world of digimodes, a new mode called 'FT8'. I had been playing with JT65 as band conditions have been very poor for quite some time and for me, the only way to make reliable QSO's was to run digital mode. I've racked up a lot of contacts on PSK31 and first dabbled with JT65 back in 2013 but FT8 has been a revelation. Each over takes 15 seconds to complete resulting in a QSO that can be completed between 2 stations in 1 minute! As with JT65 there is no extraneous waffle about station equipment, the local WX, etc... just 4 digit locator, signal strength and 73, that's it!
It seems to me that FT8 is taking the digimode world by storm, I've checked the PSK frequencies and they don't appear to be as busy as they once were and this morning I managed to work 14 Japanese stations on 20M using FT8. I wonder how many I might have worked by PSK31..?!

The software is free and can be downloaded from https://physics.princeton.edu/pulsar/k1jt/wsjtx.html

Once your callsign and location details have been entered and you have configured it to run with your rig that's pretty much it. You can call CQ and when a station replies the QSO will be completed automatically with the auto sequencing option selected. Logging is handled by 'JTAlertX' which can be downloaded from http://hamapps.com
I use Ham Radio Deluxe v6 for logging and I had to manually add FT8 as a mode by going into 'Tools > Configure > Modes' and adding FT8 to the list of modes, by doing this each QSO will be correctly logged as FT8.

Enjoy FT8! If anything it's just a great way to rack up your contacts and of course, being a weak signal mode there's no telling who might reply to your CQ!

I've been using the free version of the great program 'Ham Radio Deluxe' up until quite recently when I started to notice that the program was becoming quite slow. I uninstalled and reinstalled but this didn't solve the problem and decided that I needed something different, something a bit more reliable that wasn't prone to hanging or the occasional crash, something that could be used as my everyday logger as well as a contest logger.
I searched the web, downloaded various programs, deleted many just as quick but eventually came across a program called AC Log by N3FJP. I liked the layout, it was easily configurable although I was unable to configure the tab order of the various boxes on the logging screen but overall, it did what I wanted it to do. The only real issue for me was because most of my operating is in digimode and I really liked DM780 I found it hard to get to grips with some of the digital programs that would work with AC Log.
I tried to use DM780 with AC Log but found it very frustrating that I could not get the two apps to communicate. Maybe you can't? Maybe I misunderstood how the two interact?
Anyway, after getting a bit fed up with JT-65 (although the software WSJT-X, works flawlessly with AC Log) I decided to look at the more recent versions of HRD.
I downloaded the trial version, installed it, launched the program and imported my logbook. It was like being reunited with an old friend! The familiarity with the app is enough to convince me that I should buy the software despite its fairly steep price.
I have 30 days to play with the program so will look for a possible solution to integrating DM780 with AC Log but I have to say that the ease of use I feel for HRD may mean I have to break out the the credit card..!
No comments:

Turn your power down!!

I spotted this station SV9RMU in Crete on JT65 yesterday closing with the highlighted message stating he was running 40 Watts into a Hexbeam! 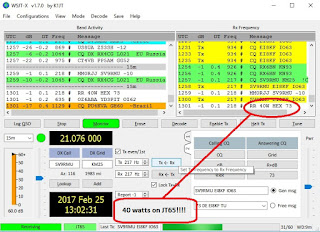 Why so much power?? Anyone using this mode should understand from the outset that anything above 10 to 15W is excessive, in fact somewhere around 5W is the norm for this mode.
Sadly, this kind of behaviour and lack of understanding of the operating protocols of digital modes is leading to increasing levels of QRM in the digital portions of the amateur bands. Once power levels start to increase it becomes a one way street with little chance of normal or proper use of the digital mode used.
No comments:

For a few years now I've found myself increasingly using a headset while playing radio, sometimes to mask any background noises such as the television when my girlfriend is watching it or to help hear those weaker stations, especially those when in a contest.
There are a number of brands aimed at the amateur radio market which come usually at a high price but a brand that I've been using can be bought quite cheaply online. I recently bought a replacement set of headphones made by a company called 'Natec'. The original set were called 'Natec Grizzly', a comfortable headset which are still working well and will be the backup headset to the new set called 'Natec Toucan'. This new headset is very comfortable and judging by the reports I receive they are equally as good as the previous set. 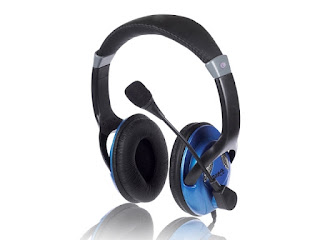 I'm sure there are many brands out there that like the Natec brand are aimed at the Skype user or PC gamer and are much cheaper than equivalent sets aimed at the amateur radio user but for the price I paid, approximately €15, they represent excellent value for money.

The existing 3kHz wide channels remain available as long as the user has paid ComReg the €30 fee for the use of these channels. Users are allowed a higher power allowance of 23dBW (200 watts PEP). The frequencies are as follows...

As USB is the preferred mode on the 60m band set your transceiver to a frequency 1.5 kHz below the frequency, e.g for 5.405 MHz set your TX frequency to 5.403.5 MHz USB. This way you will minimise the chances of transmitting out of band.
No comments:

My name is Andrew Martin and I live in County Kildare, approximately 50km from the capital city of Dublin.
I initially became licenced in the UK in early 2005, first as M3IYB and then as 2E0IRL. I never operated under these calls. In late 2005 I returned to Ireland to take a contract job at a telecoms company and sat the first Radio Experimenters exam administered by the IRTS. I was issued the call EI3GSB and I eventually took the morse test in February 2012 and received my Class A licence on Friday 9th of March 2012.


This blog is about my own experiences in amateur radio and I hope to update it fairly regularly. 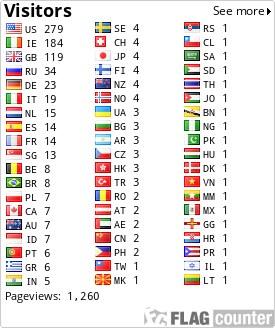